Before you go, check this out!

Did you see this? 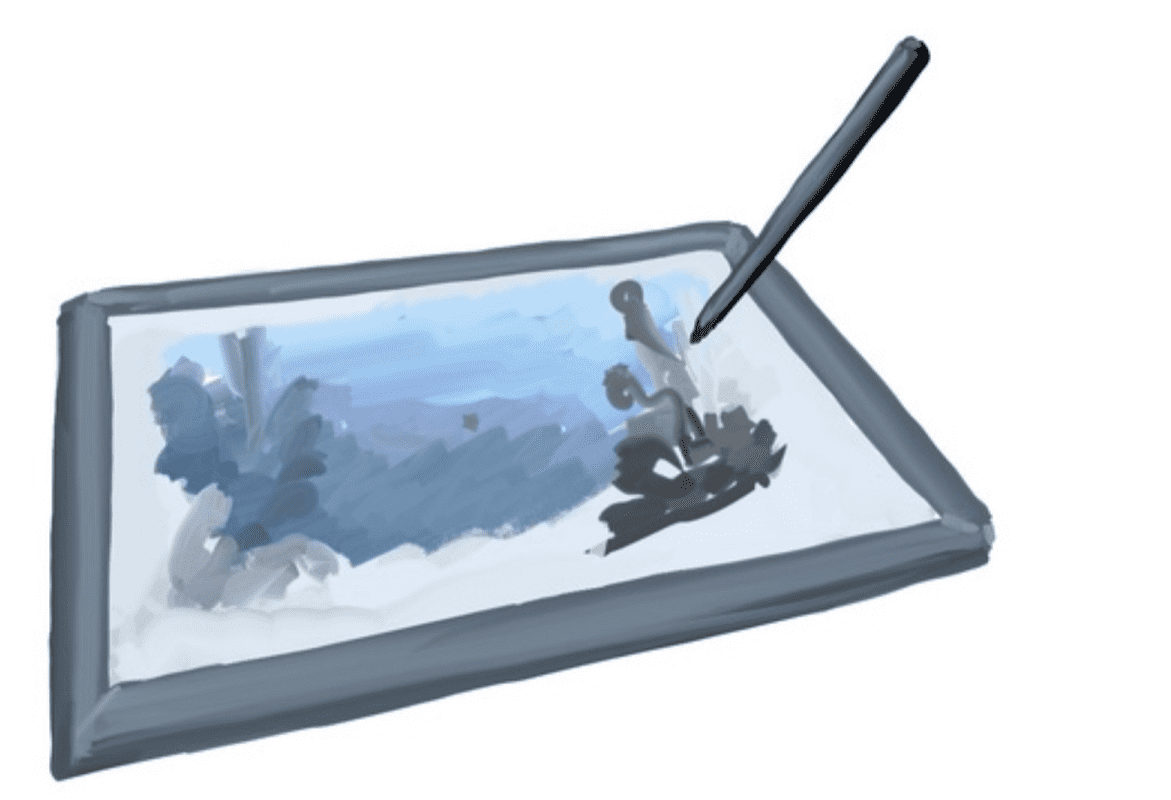 Whether you are a more traditional painter, a beginner or a seasoned expert you’ll probably learn something new by drawing, sketching, or painting digitally. The key is to start with simple tools and with the simple basics of  color and shape.

Using the computer, tablet or smart-phone you already have is the best way to get started with digital sketching. Ideally you would use a stylus on a touch screen device but even that isn’t required. For software, choose an application that is beginner friendly and works on most common operating systems and hardware.

Below I’ll share my recommendations for hardware and software to help you discover a new way to enjoy making art.

​How to use  Computers, Tablets or Phones for Sketching

For the hardware side of things, if you are reading this article then you have a computer, a tablet or a smartphone. Technically, that’s enough equipment to get started.

While you can paint on a computer with a standard mouse, a device with a touch screen is the most intuitive experience. You can draw with your finger on the touch screen but it doesn’t have much more accuracy than actual finger painting on paper does for me. A better experience might be to use a touch based stylus.

A stylus is a pen-like device with a nib on the end that a touch screen can “read” and respond to. A stylus is more accurate than a finger and it allows you to have more control like you would have with a brush or a pen. For a few dollars you can find a stylus and give it a try as well.

The Two Main Types of Styluses (Styli) are Capacitive and Active

The most popular examples of an active styles are: the Apple Pencil, the Microsoft Surface Pen and the Samsung S Pen.

For precise activities like lettering or doing small finely detailed work, an active stylus is the better choice. However, with this comes a price. Active styluses are generally more expensive and work with fewer devices.

A capacitive stylus is a less expensive choice. The trick is to get the right one. I tried one of those cheap rubber tip styluses that you’ll sometimes see on the end of an even cheaper ballpoint pen and it was terrible!

A better choice is a more premium version of a capacitive stylus like the MEKO (2 in 1 Precision Series) Disc Stylus. (Amazon Link https://amzn.to/3le1GpK)

The Meko Stylus surprised me at how good it was.
​
The Meko stylus has two tips. A 6mm microfiber nib on one end and a 6.8mm clear disc on the other.

Using a fiber tip stylus like the Meko has is so much better than the cheap, sometimes free, rubber nibbed styluses. The fiber keeps contact with the screen well and it is firm. The glide on the screen with the fiber tip feels more natural than with a rubber tip. Either nib is still a little big for precision work though.

The Meko addresses the precision issue with the clear disc nib. The clear disc does a great job of allowing you to see the very center of the contact area. This is best utilized with the zoom feature of your drawing/painting app. Seeing those fine details, zoomed in or not, is better with the disc tip than the felt tip.

Here are a few examples of what I was able to do with the MEKO stylus on a standard smartphone. Keep in mind that each of these paintings took me a couple of hours, but painting takes time. It is part of the fun.

The Software for Drawing or Painting You Should Use

There are many choices in this area as well but I’m going to go easy on you and give my recommendation up front. You should start by installing a free program on your phone, desktop or tablet called Artrage. It is the software I used for the paintings above.

​The great thing about Artrage painting software is that it is compatible with Apple iOS, Microsoft Windows and Android.

Artrage is the most intuitive program I’ve used for quickly exploring the digital medium. It does great at mimicking the natural experience of drawing and painting. The dedicated pencil tool within the app is great for pencil artists.

There are other software programs that are popular as well. Adobe Photoshop, Corel Painter, Procreate and AutoDesk are some top choices. But if you are just getting started or want to try something pretty great with very little risk (free to start), Artage by Ambient Design is the way to go.

Other Options for Drawing or Painting Digitally

Tablet Computers
There are many tablet computers to choose from and many have a dedicated Active Stylus a few options include:

For each of these, from a technology perspective, I believe the differences to be largely preferential. I’ve used all of the above and I ended up choosing the least inexpensive options of Microsoft based tablets and a Samsung based phone.

The truth is that you should just stick with the ecosystem you are comfortable with. If Apple, iPhones, and iPads are your thing (and I don’t blame you, they are beautiful devices) then go with Apple.

If you use Windows software elsewhere in your life and like the flexibility of having a near laptop-like experience along with a tablet, then go with the Microsoft Surface.

Software is an important part of the decision

As mentioned previously, my favorite painting software, Artrage runs on iOS, Android, or Microsoft operating system. . It is worth noting however that the Windows version of Artrage is more fully featured than the iOS app. Keep in mind any software you choose is often updated so consult the websites of the applications to be sure you are getting what you think you are.

Attaching a Drawing Tablet to your “normal computer”

A final option you may consider for traditional non touch screen enabled computers is buying a drawing tablet that plugs into your computer like a mouse would. This solution requires you to draw on the tablet next to your computer screen. An example of this would be a Wacom Tablet – Shop Wacom on Amazon or the less expensive Huion Tablet – Shop Huion on Amazon . Using a detached tablet takes a bit of practice as it isn’t natural at first to draw on a blank tablet with the monitor next to it. Wacom has created a monitor/tablet that also displays what you see on the monitor onto the connected tablet as well. In some sense, this is like having an attached touchscreen monitor to your existing computer.

I’m not a fan of the tablet hooked to a computer solution though because it is generally more expensive overall and less intuitive or portable.

This website is about painting with pencils but it is not limited to pencils.

A stylus uses very similar strokes as  regular  pencils, pens, and markers do.    Digital drawings and paintings can be  fantastic works of art.  Similar to photographs, images of any kind evoke emotion in both the creator and the viewer.  Digital art is absolutely a legitimate art form.

The Most Mess Free and Portable Drawing and Painting Solution

The convenience and portability of sketching on a smartphone can be even more convenient than a sketchbook and a few pens or pencils. If you want to keep art light while traveling, it is easy to pull out a phone and stylus and sketch away. You probably carry your phone all the time anyway.

Less Expensive Sketching
It may not be cheaper at first if you are buying a tablet like an iPad or Surface Pro solely for painting but if you already have one then it may well be an affordable option.

A full set of brushes and a full set of paints , pastels, pens, markers, pencils, or whatever isn’t cheap. When you add in the extra cost of the surfaces it can add up.

Quick and Easy Sketching
You will improve as an artist by painting digitally. A primary reason for this is because of the convenience factor mentioned previously and because painting digitally simplifies the learning curve. From a bio mechanics standpoint, painting digitally uses the same motions as drawing with a pencil. This frees you up to focus on the basics of line, shape, tone and composition.

Learning shapes, values, colors, light and composition is required regardless of the medium so why not use a digital medium as a mess free way to practice and still get something that is quite beautiful and rewarding to share when you are done.

With your computer, tablet, or smartphone and favorite software in hand, you can paint and sketch as much as you’d like as often you’d like. In the same way that digital photographers can shoot more pictures without the fear of running out of film, digital artists never need to fear running out of paint. So give it a try!

Being an artist is not my day job. (I work in Information Technology). Making Art a great hobby for me though. I bet it can be for you too!

You would think that a podcast talking about drawing and painting wouldn't work very well. Shouldn't someone interested in learning to paint or draw just watch instructional videos on YouTube? Not...

Continue Reading
link to Plein Air Painting from a Car

Because it can get cold outside, I made the video below showing how you can sketch or paint in your car.   As an added bonus, I show the gear I used to do the video recording as...

Art has been a great hobby for me and can be for you too.

This site is a participant in the Amazon Services LLC Associates Program, an affiliate advertising program designed to provide a means for sites to earn advertising fees by advertising and linking to Amazon.com. We are compensated for referring traffic and business to Amazon and other companies linked to on this site.